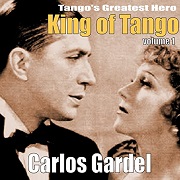 "Por Una Cabeza" is a Tango Song, composed and sung by Carlos Gardel (1890-1935) with lyrics by his song-writing partner Alfredo Le Pera (1900-1935). Though born in France, Gardel moved to Argentina with his mother at a young age, where he became a hugely popular singer and songwriter who popularised the Tango. Both the songwriters died in the same plane accident in 1935 at the height of their careers. "Por Una Cabeza" is a horse-racing term meaning "By a Head" (a close win), and the song tells of a lover who is equally addicted to women and betting on horses. It was originally written as a song for voice with lyrics and a piano accompaniment, and a short additional vocal part in the chorus. There are many recordings still available of Gardel singing his songs. The album whose cover is featured here is called "Carlos Gardel: The King of Tango Vol.1: 1927-1930", and the song "Por Una Cabeza" is one of the 25 songs included. The album can be found on Amazon.co.uk and Amazon.com available on CD or for Streaming/Download. "Por Una Cabeza" is frequently heard these days in instrumental arrangements, especially with a violin playing the melody, and in this form it has appeared on several film soundtracks, most notably "Scent of a Woman" where it underscores a famous Tango scene. You can follow Gardel's example by flexing the rhythm and tempo.

The sheet music presented here is the original Piano/Vocal version. Gardel was a Baritone so the main vocal part is ideally pitched for that voice range. The corresponding midi and mp3 files use woodwind sounds in place of the voices. On mfiles we have also included two instrumental arrangements of "Por Una Cabeza", one for Violin and Piano and one for Piano Solo.

Here is a video of Por Una Cabeza:

The image below is the first page of the sheet music, and here you can download the full sheet music for Por Una Cabeza in PDF format.