A preponderance of rising musical stars made their mark this year, further refuting the oft-held opinion that there's no creativity or spark left in film music anymore. Couple this with a strong showing from soundtrack veterans like John Williams and 2017 proved to be another dynamic, exciting and colourful year for the art of film soundtracks.

Here are the 10 best scores of the year. (This list encompasses scores released between 1st January and 31st December 2017 in the UK.) Listen to Sean's top 10 scores of 2017 on Spotify. Composer Daniel Hart and director David Lowery continue their fine collaboration with this offbeat indie drama, the story of a deceased man (Casey Affleck) who returns as a white-sheeted spectre to observe his bereaved wife (Rooney Mara) going on with her life. Hart's undulating, disharmonious score is a real gem, fluctuating strings veering from the melancholy to the menacing in a manner that recalls the likes of Arvo Part, or maybe Johnny Greenwood's more accessible film work. A diverse score that also encompasses Latin chanting and a Hart-penned pop song, 'I Get Overwhelmed', it's one of the year's most distinguished. The score of A Ghost Story is available at these links at Amazon.co.uk and Amazon.com. One doesn't readily associate Clint Mansell's music with tender lyricism or romance, his scores for the likes of Requiem for a Dream and High-Rise veering more towards the angry, turbulent end of the spectrum. Nevertheless he has showcased beauty before in the likes of The Fountain, but even so the gentle grace of Loving Vincent is a delightful surprise. When it came to writing the score for cinema's first painted movie, Mansell decided to paint with music in the same way, subtle octave changes and instrumental shifts carrying us from lilting strings to ominous piano and back again. Mansell certainly needs to write in this idiom more often. Loving Vincent is available at these links at Amazon.co.uk and Amazon.com. "Hiya, Georgie..." Director Andy Muschietti's triumphant Stephen King adaptation is officially the most successful horror movie of all time, but the real reason it works is by putting its adolescent Losers' Club characters front and centre. This has the effect of heightening the spine-chilling horror of Bill Skarsgard's cackling Pennywise. It also informs the structure and tone of Benjamin Wallfisch's score, one that approaches the story as an adventure first, and chiller second. Grounded in equal amounts orchestral compassion as chaotic, dissonant terror (listen out for the 'Oranges and Lemons' sung refrain), it's a challenging but highly impressive horror effort from a composer who specialises in them. The album of Wallfisch's score for IT is available at Amazon.co.uk and Amazon.com. Roger Michell's lavishly mounted Daphne Du Maurier adaptation triumphs in the central casting of Rachel Weisz, perfectly inscrutable as the possible murderess of the title. The Gothic melodrama and period romanticism of the story allows composer Rael Jones to step up to the plate with a gorgeous, dark-hued score, one that resonates with all the mystery and intrigue of Du Maurier's story. Although it's perhaps not as thematically memorable as it could be, the score's slow-burning atmosphere pays off in the final stages, Jones completing his transition from music arranger for the likes of Hans Zimmer to composer of significant repute. My Cousin Rachel can be found at at Amazon.co.uk and Amazon.com. Enveloping audiences in a highly complex and devious mystery, director Park Chan-wook's The Handmaiden re-imagines Sarah Waters' novel Fingersmith as a turn-of-the-20th-century, Korea-based thriller. It's sexy and darkly sumptuous, beautifully designed and with a lustrous score from Chan-wook's Oldboy composer Yeong-wook Jo. Taking his cue from the formal beauty of the director's camerawork, Jo fashions a lavishly romantic score that also has satirical overtones, one that, in its deliberate air of overblown insincerity, alludes to the lies, role reversals and betrayals that power the story. The score for The Handmaiden can be hard to find but you can start your search at the following links Amazon.co.uk and Amazon.com.

5. A Cure for Wellness (Benjamin Wallfisch) Gore Verbinski's lavish sanitorium horror confounded the critics and sank at the box office, but its visual opulence and pastiche nature did at least allow Benjamin Wallfisch to conjure another stunning soundtrack. Pitched at a more grandiose, majestic register than his IT score, A Cure for Wellness is centrally anchored by an eerie vocal theme that alludes to a classic history of horror scores, eventually elevated into a sumptuous waltz that marks some of the composer's finest writing. And with plenty of atonal and electronic experimentation, it's also a score that knows how to frighten when necessary. Wallfisch's score for A Cure for Wellness can be found at Amazon.co.uk and Amazon.com. 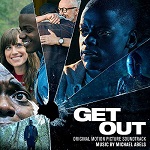 Jordan Peele's directorial debut is one of the most assured and entertaining to have emerged from Hollywood this year. A satirical horror-comedy that fuses Guess Who's Coming to Dinner with 12 Years a Slave, the movie has proved one of 2017's greatest talking points, and much of its impact can be credited to composer Michael Abels. Clearly inspired by the wickedly humorous touch of his director, Abels combines everything from eerie Swahili chanting to tongue-in-cheek infomercial pastiche and gentle bluegrass, in the process leaving us with a highly distinctive and eccentric score that demonstrates some of the freshest horror writing in many years. Get Out can be found at Amazon.co.uk and Amazon.com.

3. War for the Planet of the Apes (Michael Giacchino) It's been a fantastic year for Michael Giacchino, not only capping off the critically acclaimed Apes trilogy but also scoring a hit with his punchy score for Spider-Man: Homecoming. In the end, it's the former that wins out, a wholesale maturation of the dark, toiling ideas heard in 2014's Dawn that invests War with extraordinary levels of pathos. Beefing up the orchestral ensemble and gracing the score with a new set of superb themes (the highlight being the haunting one for Nova), it's a highly powerful blockbuster score that re-affirms Giacchino as the modern day action master. The score album of War for the Planet of the Apes can be found at Amazon.co.uk and Amazon.com. John Williams returns to his signature franchise full of renewed vigour and creativity - astonishing when one considers this is now his eighth score in the Star Wars series. Whereas The Force Awakens felt akin to putting musical puzzle pieces in place, Williams is now clearly liberated to start building a rich musical canvas akin to that of the original and prequel trilogies, stitching together the themes from Episodes 4, 5, 6 and 7 to create an engrossing tapestry full of wonder, excitement and beauty. Now in his 80s Williams demonstrates more musical storytelling flair than anyone else, exemplied in the extraordinary 'Battle of Crait' track that stands as one of his greatest-ever Star Wars achievements. The Last Jedi album is available at Amazon.co.uk and Amazon.com. Music for silent cinema naturally comes freighted with a greater sense of expectation: not just the background melody, it is the beating heart and soul of the film in question, acting as the inner monologue of the characters who do not speak. It therefore stands to reason that Laurent Perez del Mar's score for The Red Turtle is one of the year's most wondrous, heavenly and beautiful achievements, investing the French animated movie with soul and spirituality. Written for full orchestra and choir, it soars along with the profound themes of Michael Dudok de Wit's breathtaking film, at times evoking the majesty of Ennio Morricone - and there can surely be no higher compliment. The score for The Red Turtle can be found at Amazon.co.uk and Amazon.com.