Over the span of just 6 years, Jeff Russo has risen from relative obscurity to be one of the leading composers in television. He began his career in the 1990s as a founding member of the rock band Tonic. The group achieved success in 2003 when their third album Head on Straight received two Grammy nominations — one for Best Rock Album, and the other, Best Rock Performance by a Duo or Group with Vocal, for the song "Take Me As I Am." His work with the band provided him with the necessary experience in order to branch out and start a solo career composing and producing.

More known for his TV credits than his films, Russo's recent film work includes Peter Berg's Mile 22 (2018) starring Mark Wahlberg and the drama Lucy in the Sky (2019) starring Natalie Portman and Jon Hamm, directed by Noah Hawley. Russo won an Emmy and received two additional nominations for his thrilling work on FX's ongoing black comedy drama anthology series Fargo (2014-present). He followed that up with the miniseries Tut (2015) starring Avan Jogia and Ben Kingsley, based on the life of Egyptian pharaoh Tutankhamun. Currently, Russo is engaged as the composer for CBS' new incarnation of the beloved Star Trek franchise. Beginning in 2017, he scored the first season, and subsequently the second season of Star Trek: Discovery. In 2020, Russo also scored the critically acclaimed series Star Trek: Picard which saw the return of Patrick Stewart in the role of Jean-Luc Picard. Returning to an orchestral palette, Russo robustly combines electronics and acoustic instruments alike, producing a unique sound that, at the same time adheres to the Trek musical lineage, as well as making it his own. The nostalgic callbacks to Alexander Courage's "Star Trek Fanfare" and Jerry Goldsmith's "Star Trek March" are smartly handled. As of this writing, Russo is penning the music for Star Trek: Discovery's third and final season, due to be released in late 2020. 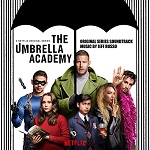 Among Jeff Russo soundtracks are the following: