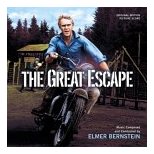 Sometimes confused with the conductor/composer Leonard Bernstein who scored the occasional soundtrack, Elmer Bernstein has had a long and distinguished career specialising in film music. He may be best remembered for the rousing themes from The Magnificent Seven and its sequels, and certainly as a result of this he was asked to score several other western movies such as "The Comancheros" and "True Grit" (one of several Westerns starring John Wayne and scored by Bernstein). In fact Elmer Bernstein is so closely associated with Westerns that he was asked to score "Wild Wild West" even though it is a late, unconventional member of that genre. His output also includes much from a wide variety of other genres, including several requiring a more sensitive touch from the classic "To Kill A Mockingbird", to "My Left Foot" and "The Age of Innocence". Bernstein was a pianist in his teens before studying other facets of musicianship. In some ways like his namesake Leonard, he had a mentor in Aaron Copland who helped to promote his talents. It is clear that Bernstein owes creative debt to Copland too for the simple and direct yet expansive sounds of his Western themes. Elmer Bernstein wrote the ballet music sequence for Oklahoma. Bernard Herrmann gave the young Bernstein an early break when he recommended him to Alfred Newman at Fox for the film "The View from Pompey's Head" and Bernstein was to do much to promote the music of Herrmann. Firstly, he used and adapted Herrmann's themes from the original Cape Fear for the remake of the same name, also incorporating some of Herrmann's rejected music for Torn Curtain. Secondly, he also wrote the soundtrack for a documentary film called "Music for the Movies: Bernard Herrmann". He won an oscar for his work on "Thoroughly Modern Millie", and is certainly no stranger to the oscar award ceremony having had several nominations and being the resident arranger and conductor at the ceremony itself for a time. His most recent nomination is for his score to Far From Heaven.

Bernstein's film music often focuses on the more positive emotions of romantic love, innocence, excitement and fun, though he has used a Jazz idiom on a number of occasions. His music for "The Man with the Golden Arm" stands out as a particularly powerful example of Jazz-influenced scoring and is quite unique in comparison with the bulk of Bernstein's output. The music is dirty and gritty and brash and harsh, and it see-saws between a deep despair and a driven recklessness. The music is scored in part for Jazz Band (arranged by Shorty Rogers) and in part for a normal orchestra, and depicts the ups and downs of a drug addict called Frankie Machine (played by Frank Sinatra). The character is also a drummer in the film, and the soundtrack very much pushes the drums to the fore. The music is as rhythmically assured as Elmer's namesake Leonard and as darkly psychotic as the work of Bernard Herrmann. Indeed it can favourably be compared with the latter's score Taxi Driver in both idiom and impact. A small thematic relationship even suggests that Herrmann may have been thinking of "The Man with the Golden Arm" at the time of this composition.

At the age of 79, Bernstein recently celebrated 50 years as a film composer by conducting a concert of film music as part of the 2001 promenade concerts in the Royal Albert Hall. The programme included music from Ben-Hur by Miklos Rozsa, The Adventures of Robin Hood by Erich Wolfgang Korngold, Gone with the Wind by Max Steiner, a number of pieces from the Western music of Dimitri Tiomkin including High Noon, some film music by his mentor Aaron Copland, the theme from David Raksin's Laura, A Place in the Sun by Franz Waxman, Taxi Driver by his favourite Bernard Herrmann and music from his own films The Ten Commandments, The Man with the Golden Arm and The Magnificent Seven. Bernstein has conducted a number of concerts of his own film music recently in the UK and (we expect) elsewhere marking his 80th year including one in Glasgow which we have reviewed on mfiles.

Bernstein was the surprise (and surprised) guest recently on the UK TV programme "This is Your Life". There was of course a quick resume of his film career, and he met many of the distinguished people he had worked with over the years including lyricists Alan and Marilyn Bergman and Don Black (True Grit). Sadly Bernstein died not long after this was broadcast. (This left a vacancy on the board of ASCAP which has now been filled by James Newton Howard.) While Elmer is gone, his music lives on in so many ways. The theme tune from "The Grifters" taken from track 1 called "The City" is currently being used on TV adverts for McDonalds in the UK. The following link will remind you of his theme for The Grifters.

Piano sheet music is available for the Magnificent Seven, and you'll find this, the Great Escape and other themes in several compilation books of great film music. We also point you to our reviews of The Magnificent Seven, the Great Composers: Elmer Bernstein compilation CD, and one of Bernstein's 80th birthday concerts, and note that further information about the composer can be found on his web-site at www.elmerbernstein.com. For soundtracks there are many great examples to chose from, and these are only a few of our favourites:

Here is the CD of Elmer Bernstein's score for "Trading Places" signed by the director John Landis, and 2 items signed by Elmer Bernstein. Our thanks to Petr Kocanda for permission to use his collection of autographed CDs and LPs. Click any thumbnail below to see a full size version of the image in a separate window. 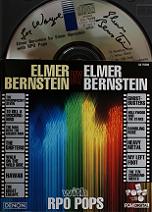